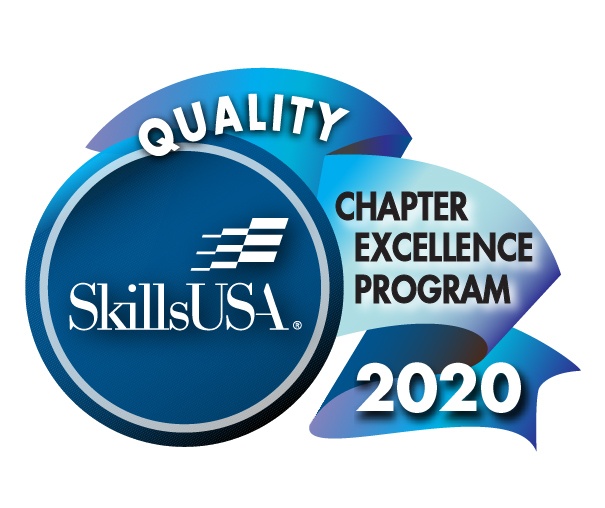 Lanier Technical College was awarded the SkillsUSA National Model of Excellence distinction! After a robust national competition, Lanier Tech is one of only 24 colleges and high schools to earn the distinction.

Throughout the year, local high school and college SkillsUSA Chapters held multiple activities that fell within one of the three categories of the SkillsUSA National Framework–Personal Skills, Workplace Skills, and Technical Skills Grounded in Education. The local chapters ultimately submitted one activity in each of the three categories to the state-level SkillsUSA organization. Georgia’s SkillsUSA organization then chose the top two scoring colleges to submit to the national level to compete for top honors. The National SkillsUSA scored each activity using complex rubrics, and the eight top scoring chapters in the three different categories were chosen as Model of Excellence Programs. Lanier Tech’s Drunk Busters activity was one of the best in the nation for the framework category of Technical Skills Grounded in Education. The Models of Excellence program promotes the intentional learning of personal, workplace, and technical skills outlined in the SkillsUSA Framework for student development.

From all nationwide submissions, the SkillsUSA national organization chose the eight award winners in each of the three framework categories, totaling 24 award winners for the SkillsUSA National Model of Excellence distinction. Georgia has four high schools and one college that received the award.

During the week of June 22-26, the 24 colleges and high schools, which received the National Model of Excellence 2020 distinction, will be interviewed during the week-long National Virtual Award Ceremony and will vie for top-three honors for Gold, Silver, and Bronze. A team from each high school and college will present virtually to a panel of national business and community leaders in the final phase of the National Model of Excellence awards. Lanier Tech’s own Kenneth Dunaway and Ric English, both SkillsUSA State Officers, will present and answer panelist questions on the Drunk Busters activity.

Lanier Tech’s SkillsUSA Chapter held an activity to help students experience first-hand the effects of drinking and impaired driving on their health and safety along with how their wrong action can hurt, not only them but the people in their community. Lanier Tech’s Criminal Justice Program along with SkillsUSA members assisted as volunteers to man the event along with the College’s Police Officers. The activity became an unexpected learning tool for our Criminal Justice students to learn job-specific skills. Based on the after-action survey, 97% of the Lanier Tech students who participated in Drunk Busters understood the effects of driving while impaired on their health and safety.

Kari Register, Lanier Tech’s SkillsUSA Lead Advisor and member of the SkillsUSA State Planning Committee, said, “This is a team effort with Academic Advisors, Students, and the Student Affairs/SkillsUSA Advisors to organize what we already do as a chapter by following the SkillsUSA Framework. There is not just one person that makes this happen but an entire population of dedicated instructors, Students, and SkillsUSA Advisors with the support of the administration. This affirms that if we work hard as a team, we as a college can achieve great things.”

Due to the pandemic, SkillsUSA is planning a 2020 NLSC Virtual Recognition Session during the week of June 22 which will feature delegate sessions, national officer elections, and a variety of recognition segments. Annually, more than 19,000 people, including students, teachers, and business partners, participate in the weeklong event. This year’s virtual ceremony is expected to have a huge number of viewers tune-in to watch the dynamic and inspiring presenters and presentation of the coveted SkillsUSA awards.